Ky-Lynn has been a writer for The Currency Shop for 3 years now. As an international student, Ky-Lynn is familiar with international money transfers and understands the impacts of exchange rates and fees. With that, she hopes to help others by delivering content that is reliable and useful so that people get a good experience with currency exchange and money transfers. Besides surprising her team with her ability to complete all tasks ahead of even the tightest of schedules, she enjoys keeping herself active and is often either seen in the gym or outdoors.

Here is your weekly update on the Australian Dollar exchange rate. We’ll discuss how it is performing against most major currencies, specifically the US Dollar. The AUD/USD exchange rate is often the most informative in terms of how the Aussie dollar is performing.

This article will cover:

The information depicted in this video was correct on May 19th at 9am AEST.

These are the exchange rates between the Australian Dollar and other major currencies. They were correct at 9am AEST 19.05.18.

Column 1 gives you the interbank or midmarket exchange rates at the moment. We have included the Aussie Dollar against; USD, EUR, GBP, JPY, NZD and IDR.

Column 2 gives you the average bank rates being offered for currency exchange or international money transfers. We have calculated these from the Big Four Banks in Australia; Westpac, NAB, ANZ and Commonwealth Bank.

Column 3 gives you the margin between the actual rate and what the banks are offering you. This margin is what gives you an idea of whether the rate you’re being offered is “good” or “bad”. Usually, a better rate and lower fees can be found when it comes to currency. Using a comparison table let’s you find the best rate for both situations. 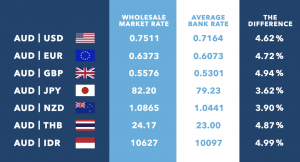 In the last week the Australian dollar dropped back below 75US cents. It has followed the same pattern the last few weeks, dropping in the middle of the week and recovering towards the weekend. It’s high last week was and it’s low was. 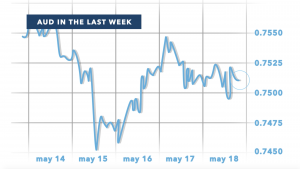 Over the last 12 months the Australian dollar has recovered somewhat from it’s low at the end of 2016. It peaked in September 2017 and got above 80US cents in January 2018. The Australian dollar is still a long way from this at this point in the year. 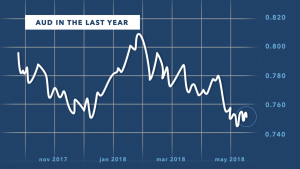 By the middle of the year, most major banks are forecasting the Aussie to stay about the same against most major currencies, or to go up slightly. NAB forecast the Aussie to go down somewhat against the Japanese Yen (JPY). Click here to read more about forecasts for the Australian Dollar. 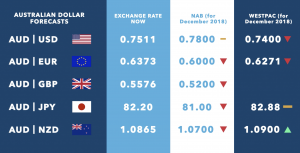 What does it all mean?

For more information about the Australian dollar you can subscribe to our YouTube channel where we post weekly updates. We also review money transfer companies and make tutorials on exactly how to do it.