Home | The Most Expensive Thing You Can Buy at the Airport

Did you know that if you exchange currency at the airport, you could lose hundreds of dollars?

That’s because, currency is without a doubt the most expensive thing you can buy at the airport. And we’re going to tell you why and how to avoid getting ripped off.

How Much Does it Actually Cost?

In two words? A lot.

The Currency Shop did some research into how much it actually costs to buy currency at the airport. As in, we literally called Sydney and Melbourne airports, over multiple days to make sure what we were hearing was right.

The airports disclose a fee of about 3%. But that doesn’t take into account the huge margins they’re putting on the exchange rate. This is where they really catch you out.

Generally, depending on the currency, you’re paying 10-20% of the transaction size.

That means that if you’re converting say, $2,000AUD to another currency, it’s costing you $200-400. Think of how far that money could go on a holiday! It’s definitely worth looking at other ways you can exchange currency, and save.

Why Does it Cost More?

Unfortunately, it’s because they can charge you more.

When you think about it, everything costs more at the Airport. Your pre flight coffee, a magazine and the packet of gum. But the difference on these items isn’t really comparable when you realise how much you’re losing when exchanging currency.

The fact is, they know that you don’t have a choice but exchanging currency at the airport. You’re about to jump on a plane, you’re desperate to have currency for your trip and you probably haven’t thought about organising it before this point.

But that’s all about to change!

How Can You Get a Better Deal?

There are definitely cheaper ways than exchanging currency at the airport.

If you are going to get a better deal, there really isn’t a way around the fact that you need to be a bit more organised. But not by a lot! You just need to work out the best way to exchange currency, for your travel situation. Briefly, here are three cheaper ways you can exchange currency:

Let’s have a quick look at each of these, so you can see which will suit you best.

1. Exchanging Currency in Your CBD

This is good because often you’ll find the rates in your CBD are better than further out. This is because, exchange providers want to win your business and there are a lot of competitors. They generally have a lot of popular currencies in stock, have good rates and low fees.

You can find the best places in your CBD, here.

This is where you can get sneaky. You can actually order currency online and then, pick it up at one of the
Airport kiosks. Doing this means that you can order the currency online, at the online rate, pay no fees and then pick it up when you leave!

You just have to be careful because the orders generally take somewhere from 2-5 business days to be ready, so you do need to be organised.

You can order currency online through Travelex, here.

3. Exchange Currency at Your Destination

If we’re honest, this might be a better option than the airport for any currency you’re exchanging. But it’s especially a good option if you’re travelling to places that a lot of Australian’s visit. For example, Bali, Thailand, New Zealand. Because so many Australian’s visit these locations, you can often find good rates in their major cities and popular tourist areas.

You just have to remember that this does mean you need to carry Australian cash over with you, and you might want to exchange some currency before you go so you have some when you arrive. Just not at the airport. Deal? 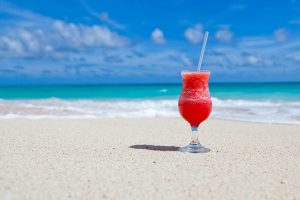 But wouldn’t you rather have an extra few hundred dollars on your holiday? Think of the cocktails!

If you can definitely save if you think about currency ahead of time.
And avoid doing it at the airport, you’re definitely going to be in a better position.