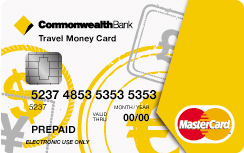 All prices are in AUD

*No charge at any Commonwealth Bank or Bank West ATM in Australia. In addition, all ATM balance enquiries are free.

Dom is from the UK but has lived in Australia for the past year. He decided to travel Asia for a month while his work allowed him to. In Australia, he banks with Commonwealth and decided to take out their ‘Commonwealth Travel Money Card’ for his trip.

Instead of worrying about carrying cash around in his backpack, or being charged using his Debit card, Dom left Australia knowing he had loaded his sufficient AUD funds into the correct currencies he would need for the countries he was visiting. It was also the only card that supported Vietnam Dong.

What Dom also found out on his trip was how easy it was to reload funds and keep an eye on his transaction history through the CommBank app. Dom also had the freedom to transfer leftover funds from currencies so he could choose to spend as much it before returning back, or redeem it.

Save time and let our online tools crunch the numbers for you.

Heading overseas? Find the best rates for exchanging currency online or find a store near you.

Learn the ins and outs of currency

Finding the best deal can be nightmare. We bring together all your options by highlighting the fees and rates.